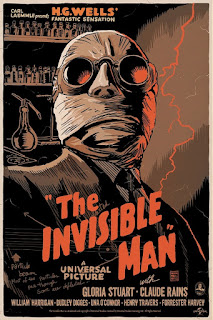 If you come to The Invisible Man hoping to see a lot of Claude Rains, you will be disappointed. However, while his body may be absent, Rains' presence is felt throughout the film through his voice. He plays Dr. Jack Griffin, a scientist who has discovered a way to make man invisible, using a substance called monocane, but its use comes with a side-effect: it makes the user go mad.

Whale's film takes no time to get the story going, beginning with Griffin already invisible and on the run. His odd appearance - he looks like a mummy wearing his sunday best - naturally raises the suspicions of townsfolk, who decide they don't want him in Iping. This leads to the unmasking of the invisible man, and displays some of the most impressive special effects in pre-CGI history.

These special effects are really the main reason to see the film. Though it is easy to figure out how they achieved some of them, others were clearly a lot more difficult, and required great creativity from Whale and his crew. This is especially true for the scenes where Griffin interacts with food or his clothes.

One can tell this is a Pre-Code film because of the implied nudity of Griffin. I can't imagine post-1934 Hollywood putting images of a invisible, naked Claude Rains roaming the countryside into audiences' heads.

The film as a whole has the charm such early special effects films have, a tribute to the ingenuity of early filmmaking. The story and the characters are not as developed as they might be, but this doesn't take much away from the story. Rains, despite not being seen onscreen makes his presence felt, much as Michael Fassbender did in Frank, when he acted under a giant, papier-mache head.
Posted by Julia Mac at 23:58