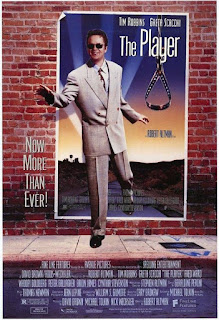 When films turn their gaze on the 'art' of filmmaking, the results can be surprising. You would think that hagiography would emerge, with films about the genius of filmmakers, waxing lyrical about how hard they work. However this is not always the case, and the best films about filmmaking are often deeply self-critical. The Player is one of these, with its depiction of a sleezy Hollywood populated by anti-heroes, from the power hungry producers to the angry, frustrated writers.

The plot feels like something out of the head of Raymond Chandler or Dashiell Hammett. Griffin Mill, a film producer who is worried about his job being taken by a new producing talent, is the subject of abuse by an anonymous scriptwriter whose idea Mill rejected several months ago. He decides to go after the guy, offering him a job. Mill unfortunately picks the wrong disgruntled writer, and manages to kill him in a fit of anger. Now he is trying to keep his job, hide a murder, keep ahead of the police, and the blackmailing writer, and cheat on his girlfriend with the dead writer's girlfriend.

What could have been a farce is played with cyncism that is sharpened by the appearance of real Hollywood stars in the film. Every character in the film seems to have sold their soul to the devil, and we cannot help but watch intrigued. The performances are all wonderful. Tim Robbins' likeability keeps us from hating Mill, even as he does despicable things. The script is brilliant, pulling us into this sordid world, one we can't help but enjoy. It is also very funny; the plot involving the death penalty movie being made is hilarious, from the awful pitch, to the finished product.

I have found Altman hit and miss in his filmmaking; for me, this is his best. He always gets good performances from his actors, one of the film's greatest strengths. The plot is also kept nice and tight, and he has managed to film one of the most intimate sex scenes in film history, using only the actors' faces, and music. For full cynical impact, watch in a double bill with Sunset Boulevard.
Posted by Julia Mac at 04:16