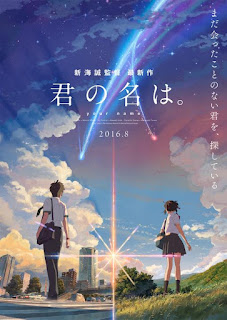 Body-swapping is usually used as a comedic gimic in films, forcing different people to live each others lives with 'hilarious' results. Shinkai's Your Name nods to these films for about half-an-hour, introducing us to Mitsuha, a teenage girl living in a sleepy Japanese village, and Taki, a handsome boy from Tokyo. We meet their friends and Mitsuha's family, who all find the personality changes of the two mildly strange; a running gag is Mitsuha's sister's bemusement at Mitusha's weird habit of fondling her own breasts in the mornings on which Taki wakes in Mitsuha's body.

The story and tone shifts suddenly in Act 2 after a revelation about a comet's progress through the skies over Japan. What happens comes as a shock, so I won't spoil it here. There are several twists and turns in the narrative, and the film comes close to losing all its threads, but thankfully doesn't, though I could have done without the last part of the ending.

While the story is aimed at a teen audience, the depth to the story and the artistry of the animation make this appealing to older audiences to. I saw a subtitled version (a first for my foreign-language averse local cinema), so I got the full energy of the characters' voices. The music is sweetly pop-y, and had some interesting lyrics, or translations at least; one was about floating in 'lukewarm cola' (is that a good thing?).

Your Name is sweet, quite funny and surprisingly moving. The animation deserves to be seen on a big screen, largely to appreciate the glorious shots of the landscapes and the awe-inspiring sights of the comet travelling through the sky.
Posted by Julia Mac at 03:42