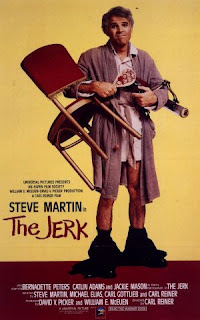 Comedies that draw their humour from characters' stupidity don't normally make me laugh. Either they are mean-spirited, or go for the lowest common denominator. While The Jerk did not induce much actual laughter from me, I found that its utter silliness, with the right hint of knowingness, worked pretty well.

The story moves from one ridiculous setpiece to the next, opening with the surprising introduction of Steve Martin's 'jerk' Navin R. Johnson telling us his life story, beginning with when he was 'born a poor black child.' From there we see his rags to riches to rags story, involving defective cans, discovering the meaning of his 'special purpose,' falling in love with Bernadette Peters, and inventing some practical glasses, which actually make people's eyesight worse.

The film is overall gently funny, with some rather sweet moments of romance between Peters' Marie and Navin. Martin' gets Navin's character just right. We do laugh at Navin's ineptitude, but also at his luck; the scene where he get targeted by a gun-crazy mad man is hilarious. Peters gets to be funny in her role, not just blandly sweet.

Carl Reiner is good at managing comedy and romance in his films, and while this is nowhere near the level of The Princess Bride, I liked it well enough. It also interesting to see Steve Martin at the beginning of his film career before he become the go-to guy for comedy in the 1980s and 1990s.
Posted by Julia Mac at 23:11