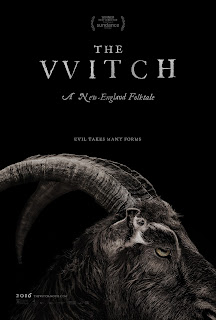 Eggers' film is not typical of modern horror. Not only is it historical, set during the 17th century, it forgoes jump-scares and loud sounds for atmosphere, intensifying the presence of something sinister with each new scene. The story follows Thomasin and her family, who strike out on their own in New England after a disagreement with their church. The patch of land they choose seems ideal, but their crops won't prosper, and something horrible lurks in the woods close by - or maybe even in their own house.

The majority of the film focuses on the dynamics of the family. Thomasin has entered puberty, something her brother has noticed, and with it comes more responsibilities. After her baby brother disappears while she was looking after him, Thomasin's mother Katherine can't forgive her, and her two younger twin siblings accuse her of being a witch - something Thomasin plays along with to scare them. All through this Thomasin's father William is trying to keep everything together.

The script is very strong. Eggers, who wrote as well as directed, uses authentic language which really helps evoke the period. You feel you are watching a folk tale. The actors are pretty good with delivery of the archaic dialogue, especially the younger children. The performances in general are all strong. Anya Taylor-Joy is really good as Thomasin. The gives her the right amount of fear of the strange happens, but with an edge of intrigue, a sense that Thomasin wants to know more about these strange powers.

Though this is story about the supernatural, it also about how fear of these events devastate human relationships. And you will never trust a goat again!
Posted by Julia Mac at 23:55