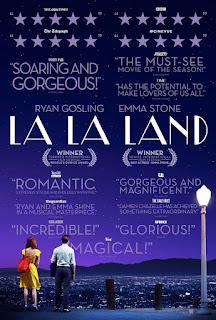 If you hate musicals or jazz, you are definitely going to struggle with Chazelle's new film. If Ryan Gosling or Emma Stone leave you cold, you are going to be in even worse trouble. And if romance and overly stylised worlds bug you no end, well, you probably shouldn't see this film.

For me, there are not enough superlatives in the world to properly describe how I feel about this film. I love musicals in general anyway, and all the films that inspired Chazelle are particular favourites of mine: those of Jacque Demy, Gene Kelly and Stanley Donen. While Ryan Gosling doesn't inspire swooning in me, he is rather lovely as Sebastian, a struggling-for-his-art jazz musician. Emma Stone, always watchable, is wonderfully fabulous as Mia, a struggling actor. La La Land takes us through their romance, with all the singing, dancing and emotions you could want.

I really loved everything about this. The cinematography is colourful, harking back to the technicolor worlds of 1950s musicals. The camera moves around the sets and characters, immersing us in this gorgeous world. The music is toe-tapping, shoulder-shimmyingly good. I am still humming 'City of Stars' days later, and the climatic 'Audition' is spine-tingling. The dancing is wonderful; as a dancer, I wanted to enter the screen and join them, particular when they dance at the planetarium. I loved Mia's wardrobe, I wanted to wear all her clothes. And best of all, there were so many references to other films, and each time I recognised something I couldn't help but smile.

Really, I cannot be objective about this film.  From the moment the film ratio expanded at the very start, announcing this was brought to us in 'Cinemascope,' I knew only a huge, honking mistake would spoil this for me. Perhaps it dragged in the last third a bit, but it ends perfectly. After a year which was sad and depressing both personally, and on a global scale, it is wonderful to watch something so beautiful, that has so much joy, and is also so poignant.

I left the cinema feeling that Chazelle had made this film for me, and if I had had someone with me, I would have danced out.
Posted by Julia Mac at 03:47