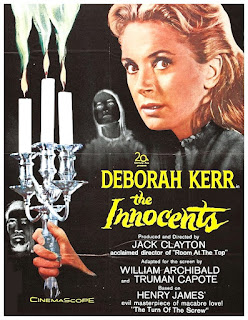 
In my mind I have a list of black-and-white films that would not work in colour, largely due to the beauty of the black-and-white cinematography. Clayton's The Innocents joins this list. Freddie Francis' camera plays with the shadows of Bly, the country estate where governess Miss Giddens is sent to to care for little Flora and Miles. The shadows are of two dead people, Peter Quint, a former valet, and Miss Jessel, the previous governess. Miss Giddens becomes increasingly perturbed by these apparitions and the oddness of Flora and Miles, and her behaviour becomes unsettling.

All the elements of this film work to create a strong emotion is discomfort and creepiness. As I said, the cinematography is eye-catching. The lack of colour in the grounds gives everything the pallor of death, while at night you wonder what is lurking in the dark places of rooms. The widescreen is used to stage characters at different distances to the camera, creating a disconnect between them, particularly between Miss Giddens and her charges. The acting is top-notch. Both Martin Stephens and Pamela Franklin are suitably weird as Miles and Flora, especially Stephens. Deborah Kerr is great as Miss Giddens, whose desire to understand Bly's mysteries brings unknown tensions and desires to the surface. You start to think that the monster resides just as much in her as the children and the house. The script is very good, drawing out the ambiguities of the story, and hinting at deviances and wrong-doing, but leaving enough blank spaces for our imaginations to fill in.

Watching films like this makes me wish more modern horror films used black-and-white cinematography, and went for the creep factor rather than the gore and splatter. People's imaginations can be just as frightening.
Posted by Julia Mac at 16:03