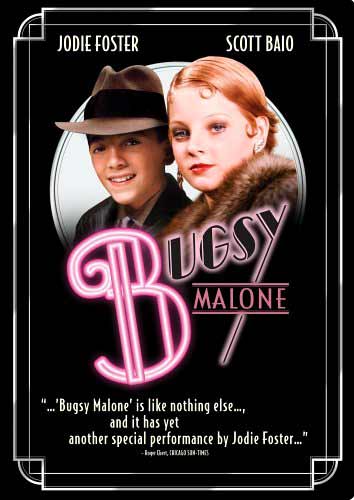 This was my sister's choice; we had not watched it for a while, and she had had one of the songs stuck in her head, and took this as a sign to watch it. If you are unfamiliar with this film, it is a musical set in the 1920/30s in New York. It follows two gangs who are battling over their turf, a circumstance complicated by the emergence of a new gun that 'kills' more accurately. The entire cast of Bugsy Malone happens to be all under the age of 17, with dubbed adult singing voices.

This premise sounds like the film could be awful; it is not. While the decision could have simply been a silly gimmick, there is something incredibly enjoyable in watching these kids play adults. The acting is a touch uneven, but by and large quite good, with Jodie Foster demonstrating her wonderful talent as Talullah. The film also shows how puberty visits the genders differently: the girls generally look the part with their make-up and hairdos, while the boys can't hide their boyishness behind their pencil moustaches (or their comparative lack of height).

The songs are incredibly catchy, and I defy anyone to watch this and not be singing 'You Give a Little Love' after watching the film. Bugsy Malone is a fun film that works for any age, and is arguably one of the few kid-friendly gangster films around.
Posted by Julia Mac at 04:50