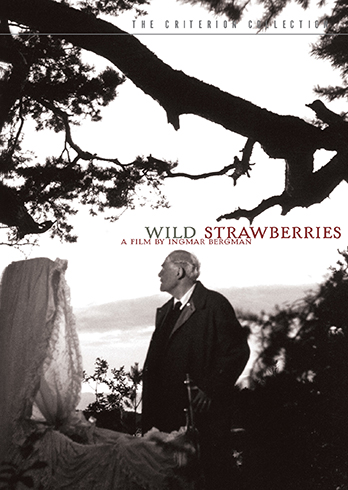 I feel like I have completed an unofficial trilogy of films that view life from its end: Tokyo Story, Ikiru and now Wild Strawberries. Each film has moved me in different ways; Bergman's film is the most existential of the three, examining Professpr Isak Borg's life from inside his own head.

The title in Swedish is an idiomatic expression that refers to a place that is a quietly significant for a person. For Isak, it is both a literal place where strawberries grow, and a place in this life he associates with his lost love. The film spend much time in the past, as Isak relives many happy and unhappy memories from childhood. The past interacts in the future, as Isak's thoughts are sparked by a physical resemblance between a young hitchiker and his love, both called Sara.

I seem to always approach Bergman's films expecting them to be sombre and difficult to sit through. I don't know why, particularly after seeing The Seventh Seal. While less light-hearted than that film, this was very moving and 'easy' to watch. Hopefully I will stop having this feeling with Bergman, whose status as one of the greatest directors ever is certainly finding no argument with me. A lovely reflection on a life lived (though whether well is up to you to judge).
Posted by Julia Mac at 17:37