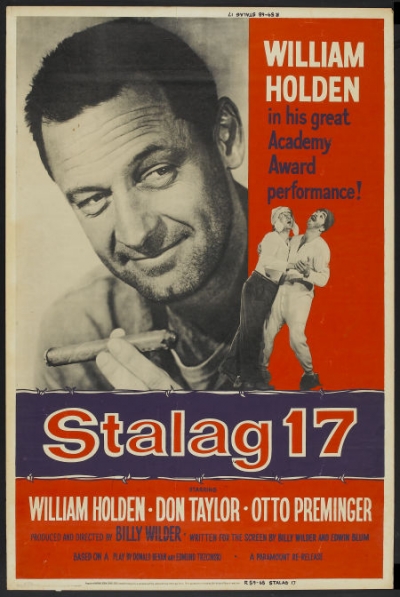 I haven't yet watched a Billy Wilder film I didn't enjoy, and I have seen quite a few. I can't think of anyone apart from Kubrick who is able to so deftly move between genres. One of Wilder's great strengths is his handling of actors, which is again on show in Stalag 17. Everyone in the cast is wonderful, particularly William Holden.

Like 12 Angry Men, Wilder manages to move the story beyond its stage origins. The cramped conditions of the camp and the hut allow the suspicions and anger of the men to fester. The mystery of who the informant is draws you in, and the revelation is really well done; I have to admit I guessed wrong, and internally went 'ahhhhh' when it was revealed.

I don't want to say much more for fear of spoiling a potentially wonderful viewing experience. I really liked this, and find my love of Wilder being cemented by each new film of his I see. In my opinion, he is criminally underrated as a director and writer, perhaps because he could do any genre, and often opted for characters over style. See this film, and enjoy a master at work.
Posted by Julia Mac at 19:26