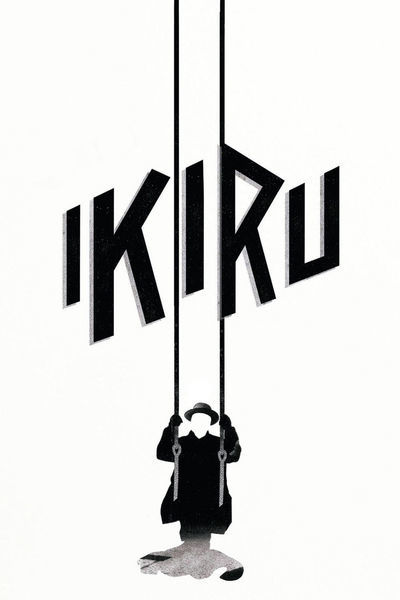 My sister is studying to be a radiographer, so she was intrigued by the opening shot of this film: an image of protagonist Kanji Watanabe's cancer in his stomach. As a result she stayed to watch the film with me. I am glad she did, for this is a great film, and should be watched by everyone. Many think of Kurosawa as a director of action, but like his compatriots Ozu and Mizoguchi, his is really interested in humans struggling to create meaning in often neglectful or hostile worlds.

This is a beautiful film in every way possible. The story is moving, following a man coming to terms with his terminal cancer, and the choice to grieve or to live as much as possible. The acting is quite affecting: Takashi Shimura is great as Watanabe, often still and quiet, and yet we see the depth of his sadness. The song he sings at a nightclub is one of the most touching moments in the film, as his pain is made public for the first time. The cinematography is also wonderful; the scene on the swing is one of the most beautiful shots in cinema.

As you may be able to tell, I loved this film. It was not sentimental but rather affirms the importance of living a 'good' life, whatever that means to each one of us. The last act is a wonderful demonstration of Kurosawa's filmmaking abilities, as we see the impact of Watanabe's actions on other people. Truly wonderful.
Posted by Julia Mac at 22:07