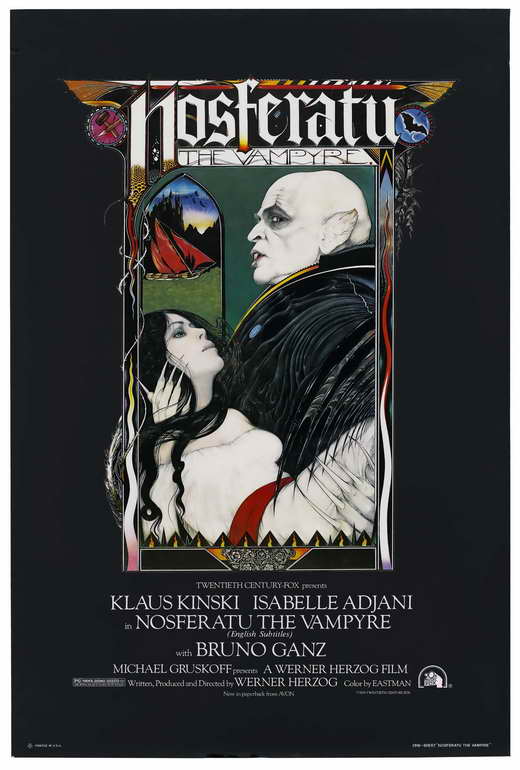 There are many riffs on the Dracula story: Murnau and Herzog's Nosferatus are probably the most arty of all. I had seen Murnau's silent classic sometime last year, and was looking forward to Herzog's interpretation. The 1979 is in dialogue with the 1920's version, creating an extra layer of eeriness and shadow.

I saw the English language version of Herzog's film, and I wish I had seen the German one. The English dialogue was delivered rather stiltedly, hampering the acting at times. This really is my only gripe with the film. The acting is deliberately stagey, mirroring the acting styles of the silent film era. Klaus Kinski and Isabelle Adjani were the standouts, providing depth to their characters. Kinski's Nosferatu was far more melancholic than Max Schreck's portrayal. Kinski's Nosferatu seemed to be on a suicide mission in going to see Lucy Harker.

The cinematography is wonderful, particularly the night scenes: the shadows and candlelight are well handled. The images of all the rats infesting the town were also striking, especially the Meal of Death scene.

The film has grown on me since I saw it, as all the elements have been sorted out in my head. Herzog is a clever filmmaker, and I am excited to see more of his work.
Posted by Julia Mac at 17:45