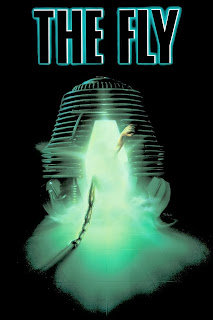 I used to think horror, as a genre, wasn't for me: the thought of watching something simply to scare myself was highly unappealing. Then I watched a few classics of the genre: Texas Chainsaw Massacre, Rosemary's Baby, Carrie and The Exorcist. I found that these films were often clever, with many more emotions in them than just horror or fear. And they were also wonderfully bonkers; and I do enjoy bonkers films. The Fly is of the same calibre of those films: an interesting concept, with love, joy and pain as well as fear and disgust, and a good dose of madness.

Goldblum and Davis are wonderful together. Their relationship adds a level of poignancy to Cronenberg's story: we share Davis' disgust and sadness at what is happening to Goldblum's Seth Brundle. Goldblum manages Seth's emotional arc well, particularly when he is in his manic stage.

The real star of the film, though, is the make-up. The transformation is as sticky and gross as you would imagine. The use of in-camera effects makes everything even more tactile and fleshy. Clearly Neill Blomkamp was referencing The Fly in District 9, particularly with the fingernail pulling.

I watched this film with my sister in the room: she is not a fan of horror (or Goldblum apparently (she called him ugly)), and asked during the film whether I was enjoying this. I certainly was. Can't wait to see more of Cronenberg's films, and I seem to like body horror films. That is something I would never have thought I would discover about myself from watching films.
Posted by Julia Mac at 17:41