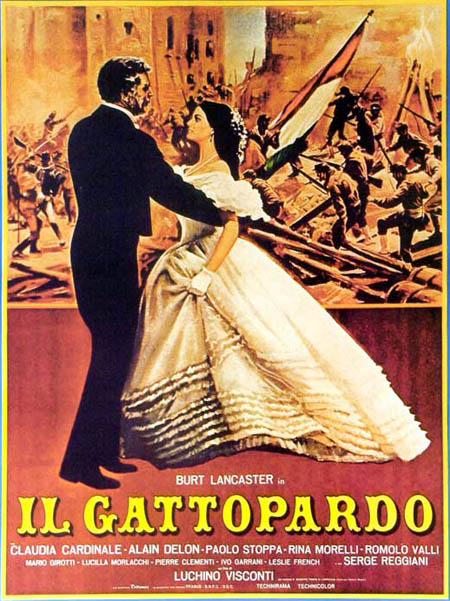 I have a difficult relationship with 'epic' films. Its not really their length; there are plenty of three-hour-plus films I enjoy. Rather, I think it is because epics stuff so much into their running time, with multiple plots and sub-plots, characters, and usually cover periods of history in a way that assumes some knowledge of events. It is very easy to feel at sea. The last point in particular hampered my enjoyment of The Leopard.

I know little about 19th century Italian history, and even less about the history of Sicily in general. While I vaguely understood how Tancredi changed political sides halfway throught the film, I didn't really know the political situation of the film's setting, making many decisions and speeches made by characters slightly baffling.

That is not to say that the film is unenjoyable. It is utterly beautiful to look at: the Italian/ Sicilian landscape, the costumes and the people. Claudia Cardinale and Alain Delon are two of the most attractive people ever committed to celluloid, and I couldn't help thinking how gorgeous their children would be (so shallow, I know!). Burt Lancaster does a good job, considering his lack of knowledge of Italian. Indeed it is a tribute to Visconti's direction that the cast are all good together considering their internationality. The film's final sequence, the ballroom, is wonderful.

There are several different cuts of this film; I watched the 185mins cut with Italian dubbing for all dialogue. I discovered (from Wikipedia) that there are shorter and longer versions, a few being Visconti's own director's cut. I am glad I watched this and am able to cross it off the 1001 Films list, but I am not sure it is one I will revisit.
Posted by Julia Mac at 05:17