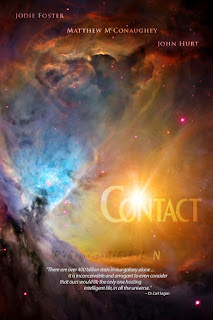 Contact is a mix between Kubrick's 2001: A Space Odyssey and Howard's Apollo 13, and clearly influenced the story of Nolan's Interstellar; there was little doubt that I would enjoy this. Add to that  Jodie Foster, who seems to have been born a good actor, and you have over two hours of clever, enjoyable science-fiction.

The visuals are little dated, but nothing compared to many other films of the time. The opening shot is still beautiful, as we travel back in time through space accompanied increasingly older music, until we emerge out from Ellie Arroway's eye. There is also joy to be had in looking at the old school technology of video, phones and even the computers.

Jodie Foster's Ellie is all you would want in a scientist: cool, collected but also passionate in her pursuit of knowledge. She may be too secure in some of her opinions, but so is everyone else. Matthew McConaughey's Palmer Joss is interesting, though his character felt a touch undeveloped.

The debates around science and religion raised in the film are interesting, and I could imagine such debates occurring were we to connect with intelligent alien life. The twist at the film's end is clever, and is left open-ended enough for us to wonder what Ellie really experiences.

Thought-provoking and emotionally satisfying.
Posted by Julia Mac at 00:57