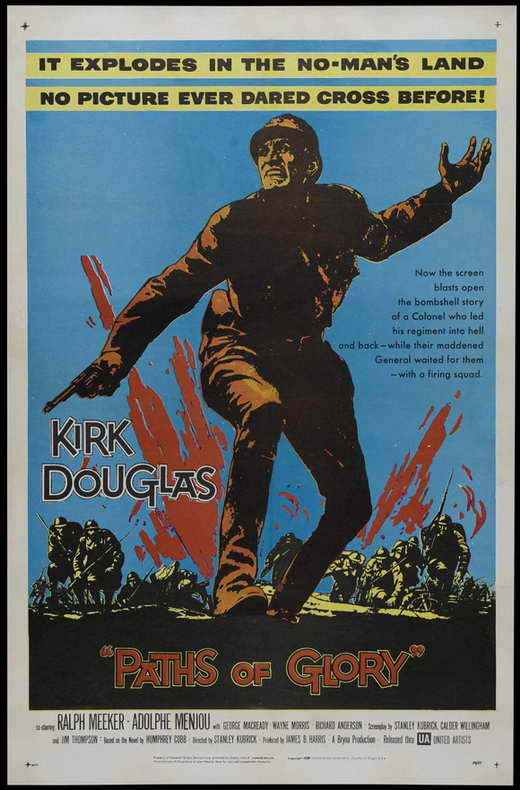 Kubrick is one of my favourite directors; I love 2001, Dr Strangelove, A Clockwork Orange, and enjoyed large parts of Full Metal Jacket, The Shining, The Killing and Spartacus. Lolita was a solid adaptation, but without much of Kubrick visual techniques, and I was rather underwhelmed by Eyes Wide Shut. So where does Paths of Glory belong? Well, I loved it. The cinematography was beautiful, particularly in the cavernous, gilded halls of the commanders' chateau; contrasted well to the dirty, claustrophobic trenches of the army. The sound, as with any Kubrick film is masterful: at the (mock) trial, Colonel Dax's impassioned speech reach General Mireau's ears as echoing noise; not to mention the barrage fire all but drowning out the artillery commander's conversation about firing at their own troops. The acting was grand, particularly from Douglas and the three innocent troops.

This again was another film that drew mositure to my eyes, particularly in the execution scene. Kubrick gives it to us straight, no sentimentality. This is what makes it so powerful. I seem to have a low tolerance for obvious emotional manipulation and sentimentality, which is probably why I like Kubrick's often clinical approach. I get more choice about how to feel, instead of being told 'This is sad. You should feel sad now.'

I have seen many (anti)war films, particularly modern ones. For me though, this and All Quiet on the Western Front (1930) are the best.
Posted by Julia Mac at 20:11