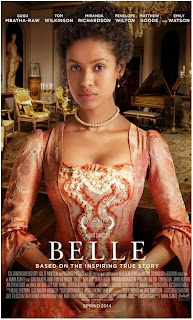 As I have said before, I unashamedly enjoy a good 'period drama:' lush costumes, locations, romance, a bit of intrigue, relationships (not just romantic ones). Put that in a film and there is a good chance I will like it. When Belle came out to positive reviews, I knew I would one day watch it. And now I have; so did I enjoy it? I did.

The acting, as with many of these types of films, is very good, particularly from Gugu Mbatha-Raw; she captures the confusion Dido Belle would have experienced beautifully. The scene where she sits in front of her mirror and claws at her skin is performed perfectly. I especially enjoyed the contrast in the story between Dido and her 'cousin' Elizabeth, with whom she grew up. Dido, though illegimate, was recognised by her father and left a decent fortune, therefore attaining a level of indepdence; Elizabeth was basically ignored by her father and left to rely on kindness from her family, and live of the hope she would marry well.

My one issue with the film is the romance between Dido and a young apprenticed lawyer, John. The behaviour of the two didn't quite fit in with the rest of the film, or the etiquette rules of the 18th century. That is not to say the two didn't have chemistry (or that Sam Reid's deep voice isn't a pleasure to listen to), but it felt clunky compared to the rest of the film.

Apart from that, I thoroughly enjoyed this film. Asante is a very good director, she clearly knows how to get the best from her actors. The film also looks beautiful; however, unlike many period dramas that don't refer to the source of wealth for many in Britain at the time, Belle constantly reminds its audience of the ugly practices of slavery.
Posted by Julia Mac at 03:28