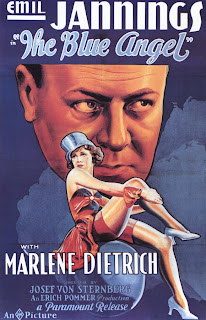 There are two versions of this film: I saw the German language one. Apparently the English language version has some subtle differences; I won't be rushing to see it. That is not to say that this film is terrible, it is not; I am glad I saw it. But I was not grabbed by the film, though the ending was very good. This is the film that propelled Marlene Dietrich into the international consciousness, so it is significant in that respect. It is curious to see her so young; in popular representations of her she is older and deeper voiced. In The Blue Angel she is youthful and her voice slightly screechy at times.

I quite enjoyed seeing/ hearing different lyrics to the famous 'Falling in Love (Can't Help It),' (in German), which talk about being ready for love from 'top to toe' and being 'programmed' for love. Apart from Dietrich, Emil Jannings gives a very good performance as a besotted fool, and his hummilation is painful to watch.

To modern audience there is not much new storywise, and it is very simple. As I said, I wasn't grabbed until the very end, which was not enough for me.
Posted by Julia Mac at 05:06