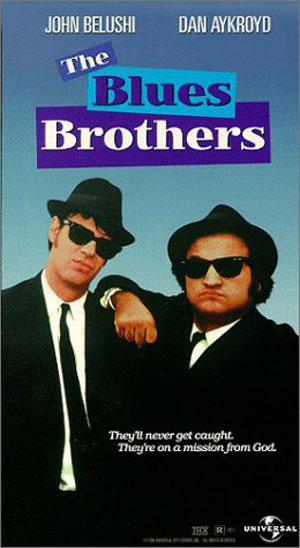 I have apparently been in a musical mood the last few days: Umbrellas, Pitch Perfect and now this. Like Pitch Perfect the musical numbers are worked more naturally into the plot than many other musicals, as Elwood and Jake, on their mission from God, get the band back together. Each musical number was even better than the previous one; I didn't think anything could beat Aretha Franklin singing 'Think', and then Ray Charles did 'Shake a Tail Feather.' Brilliant. As is Dan Aykroyd's dancing in the big concert.

The film as a whole felt like a Warner Brothers cartoon for adults; the violence was cartoonish, and Carrie Fisher's Mysterious Woman reminded me of Wile E. Coyote trying to kill the Road Runner. This film is a huge amount of fun, and if you don't have a smile on your face at the end, then I can only assume you are allergic to the music.
Posted by Julia Mac at 03:52