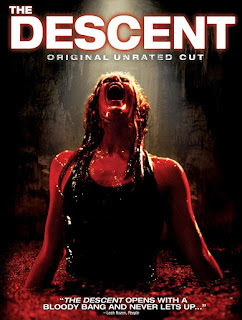 While I love horror films, few of them actually scare me. I have been a little spooked by some, and love ones that have clever ideas and well-developed concepts; but rarely I am squirming in my seat. The Descent had this effect on me as it tapped into one of my basic fears: being trapped.

Set a year after a tragic accident that killed her husband and daughter, Sarah joins five friends to go caving. One of the friends was secretly involved with Sarah's husband, Juno, and another, Beth, was aware of it. The other three women are two sisters - Sam and Rebecca - and adventurous Holly. The group head off to explore the cave system, and find themselves facing a surprising adversary.

This is one of those films to watch without reading much about it beforehand. There are revelations halfway through that change the story, upping the already claustrophobic tension. The whole film is quite clever, giving us enough details about group dynamics and teasing us with questions only to answer them later in surprising ways.

The part of the film that got to me was not the twist halfway through (that was more terrifyingly thrilling), but the scenes of the women crawling through tight openings in the rock. I am one of those people who would have a panic attack in that situation, being highly conscious of the tonnes of rock and earth on top of me. The film knows this will be true for many in the audience and plays with this fear, having the cave partly collapse, trapping the group. That is one of my nightmares, so my heart-rate was well and truly raised.

The Descent answers the question "what would a female version of Deliverance look like?" Both are about a group entering the wilderness and coming across aggressive locals who don't want them there. They also feature characters pushed to their limits, doing things they would never believed possible, like cold-blooded murder. Survivors guilt also plays a role.

The Descent has one of the best endings I have seen in a horror film. It is veritable sucker-punch, leaving you gasping for air, much like the characters. The version I saw was the "uncut" one, which is bleaker than the original American cut, but makes more sense. It is a great horror film that doesn't make a big deal about its female-focused narrative, and is all the more powerful for it.
Posted by Julia Mac at 22:42