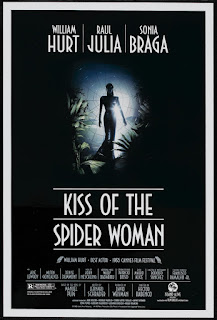 This is definitely a film I should watch again. It was not at all what I was expecting, and since I try not to read much about films before I see them, I was thoroughly unprepared. All I knew was that it starred William Hurt and Raul Julia. That was it.

The setting, the characters, the arc of their relationship, and the subplots involving a fictional WWII film make for a unique story. Raul Julia is Valentin Arregui, a political prisoner (from the left) and Hurt plays Luis Molina, a transgender woman with a love for German propaganda films. Naturally the two irritate each other at first, but slowly a relationship begins, one that eventually becomes sexual. Loyalties are created, and Molina's appreciation for the beauty in life starts to rub off on Arregui.

Considering the film's interest in identity and politics, I am surprised it hasn't become well known in recent years. It approaches the relationship between Arregui and Molina without judgment, and while Molina's double-agent role casts her as dubious (and she is in prison for assaulting an underage boy), it is much more complicated than that.

I was intrigued by the film, but also rather unsure about where it was heading, which made it hard for me to really  get into it. That being said, it was great to see Raul Julia in a different role to what I have seen (Gomez Addams) and he and William Hurt worked well together.

This is where the value of following lists lies: exposing you to films you would never have known about otherwise.
Posted by Julia Mac at 06:04