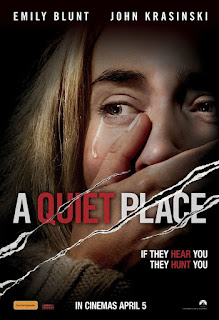 I made the mistake of going and watching this during the school holidays, and on "Cheap Tuesday." As a result the cinema had the sounds of munching, crunching and loud murmurs of teenagers. While this would annoy me not matter what the film - you are in a public place, be mindful of others - A Quiet Place is based around the idea of silence as a survival method. I wish the aliens in the film had come out of the screen and removed some of the audience.

It is a credit to the film that despite this distraction I really enjoyed it. It felt like a 1950s B-movie in terms of its simple concept and short run-time, resulting in a tense and clever whole. There is little dialogue, and the characters talk to one another with sign language, as one of them is deaf, so there are more subtitles than speech.

Survival is at the heart of almost every horror film, but this one has a collective approach: the parents are working to protect and equip their children for an uncertain future. As a family they are also living with grief over an earlier loss in the film, a plot point that terrifyingly and heartrendingly establishes the world they are living in.

Emily Blunt, who is a wonderfully charismatic presence on screen, is great here, her face brilliantly emoting her struggle to stay quiet as her body is trying to give birth, as well as protect her family. Millicent Simmonds, who is deaf herself, is also great, dealing with her grief and guilt, and growing up over the course of the story.

I am really enjoying the spate of clever and diverse horror films coming out in the last few years. A Quiet Place is another one of these, showing Hollywood that a good idea and a good story is what is needed to succeed, not a giant budget or shallow jump-scares.
Posted by Julia Mac at 23:47