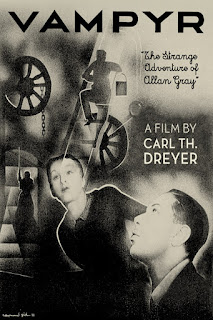 Dreyer's films have been hit-and-miss for me. The ones that I liked - Ordet, The Passion of Joan of Arc and Day of Wrath - I really liked or even loved. The ones that I didn't like so much were disappointing, though not without some interesting parts - Dreyer does know how to shoot beautiful images. Vampyr falls into the latter category.

The film is technically a "talkie" with characters occasionally saying lines, but overall Vampyr plays like a silent movie, with its intertitles and constant music. While this is fine in general, the film does rely too much on reading, particularly in its explanations of what a vampire is in this world. It also doesn't really follow a clear plot, instead wandering through a village of supernatural nastiness, often leaving this viewer wondering what was going on.

The most impressive parts of the film are the special effects and one particular scene where the main character imagines his death. While early special effects are primitive compared to today, I am always intrigued by the ingenuity of early filmmakers. Here there are shadow puppets, and double exposure to get that ghostly appearance of a character, something rarely scene in films today.

The imagined death scene is where the film reaches its eerie heights. The main character falls asleep and his spirit wanders away. He discovers his body and watches it being put in a coffin with a window. The camera then cuts between the character's face staring blankly out of the coffin and the view from the window. There is a real sense of being trapped, particularly as the coffin is moved out of the building and towards the grave.

Vampyr is not typical of horror films with its meditative pace and, for a vampire film, lack of fangs. It does have some interesting set pieces, but feels slightly unfinished, as though it was cobbled together, or even started without a script. It is visually impressive but will likely alienate modern horror fans.
Posted by Julia Mac at 17:01