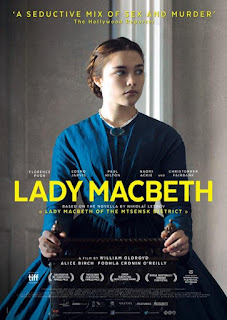 We first meet Katherine on the day of her wedding, her face obscured under a net-like veil, her eyes wide as she looks around her in disbelief. She looks like a captured creature, forced into a marriage that is really a land sale: she is just part of the deal. Her new husband and his father are awful, treating her as an object and confining her to the house and utter boredom. But Katherine is a determined woman with a strong spirit, and both Mr Lesters and their household are to learn how far she will go to get what she wants.

Florence Pugh is wonderful as Katherine. She uses quiet and stillness brilliantly to convey Katherine's frustration, and there is an ambiguity to the character that keeps you wondering exactly how far she will go (which is ruthlessly far). In her hands Katherine is a modern character without feeling like an anachronism.

The smallness of the budget is used to the film's advantage. The house is stark, adding to its oppressive atmosphere, and also keeps your focus on the actors and their movements and looks. While I do love opulent period dramas, this one does feel fresh by comparison. The camera is a quiet bystander observing the escalating violence without getting frenzied itself. It lingers on uncomfortable scenes, drawing you into the situation.

Another difference to other period dramas is the presence of race. A few of the Lester's servants are black, most notably Anna who interacts with Katherine, and bares much of the brunt of Mr Lester snr.'s wrath. Katherine's lover Sebastian is also black; he is one of the hired hands working on the farm. The colour of their skin is not made a deal of, but plays into the story in interesting ways. Anna becomes mute after a particularly traumatising experience, and the story's climax is made even more devastating because of their colour.

Lady Macbeth is a great film, with one of the best central performances of the early 21st century. Pugh's Katherine reminded me of Jake Gyllanhaal's Lou Bloom in Nightcrawler, another character whose single-minded pursuit works itself out to an astonishing conclusion.
Posted by Julia Mac at 01:28