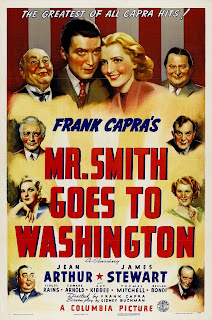 One might expect this post to contain much praise around the performance of Jimmy Stewart, who plays new senator Jefferson Smith with his usual reliability as the everyman. He is certainly highly suited to the role. However, I want to concentrate Claude Rains, an actor who I have enjoyed in every film of his I have seen. If you are a watcher of old classics, you will certainly encounter Rains many times, though never as the leading man. There is no one better to have as your ambiguous antagonist than Rains; he projects moral dubiousness, a particular charm and even a kindness at times. I can imagine no one else who could have played Senator Paine, a man who admires the incorruptible Smith, while recognising his own corruptibility.

Jean Arthur was the other performance that stood out. Her Clarissa Saunders, which could easily have been the dippy love interest, moves from cynicism to support for Smith's moral stand, and even instructs him on how to do it effectively. The whole film is filled with strong performances; say what you will about Capra's filmmaking, he knew how to get good performances from his actors.

The story feels like a courtroom drama, with its focus on the rule and process of law, and the centrepoint around a man's defence of his innocence and the truth. The only criticism I had was that the ending comes far too quickly, resolving itself rather suddenly, though it does so in a wonderfully dramatic fashion.

1939 was a stellar year in film history, and Mr Smith Goes to Washington is part of the reason. It is interesting to contrast the images of Lincoln and his famous speeches so often displayed in the film, with the popularity of contemporary film Gone With the Wind.
Posted by Julia Mac at 23:39