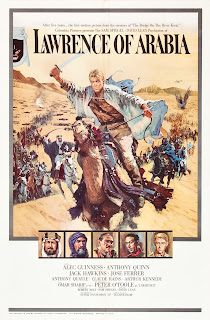 Lean's film has sat upon our family DVD shelves for around ten years, and for eight of those years still in its clear-film. Despite its esteemed position in film history, I was reluctant to watch it, largely for the same reasons as my reluctance towards Ben-Hur: it is very, very long. I decided to overcome this as I did watching Gance's Napoleon; watching the film in installments, treating the intermission as the natural break. This technique (one I did not employ when tackling Ben-Hur) has proved a good one, as I was thoroughly impressed by Napoleon and now Lawrence, while Ben-Hur felt like a slog.

I let the overture music wash over me, which I believe added to my enjoyment of the film. The score is gorgeous, and has become one of my favourites, and no small part of that being the influence of Arabian melody on the main theme. The copy I watched of the film was not a good restoration, with some scenes looking washed out. The expansive wide shots of the desert are still jaw-droppingly grand, and I would love to see this on the big screen.

I was not familiar with this part of the history of World War I, and this slightly hinder my enjoyment of the story. However that is something that won't be an issue on repeated viewings. The performances are all strong, particularly from Peter O'Toole, who plays Lawrence with a quiet confidence, and it was lovely to see Claude Rains in a small but important role doing what he does best. The use of non-Arab actors to play the Arab roles is rather cringeworthy today, even if it is actors like Alec Guinness.

This is a beautiful film that possesses some of the greatest wide screen cinematography in film history. While Lean's much more intimate drama Brief Encounter will always be my favourite film of his, his skill at directing performance and balancing relationships within a film's story are on display here.
Posted by Julia Mac at 20:20