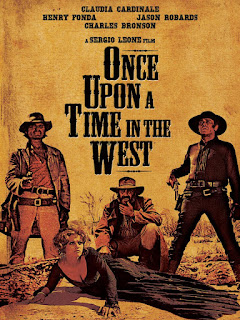 In general I am not a fan of Westerns, though I have enjoyed the odd one or two (The Searchers, The Good, the Bad, and the Ugly). Unfortunately for me, they seem to populate film lists, especially the 1001 Movies list. Despite the regard Leone's film is held in, I approached it reluctantly, and found myself very surprised: I loved it! I didn't think Leone could better The Good, but Once Upon a Time in the West is a brilliant film in every respect. In fact the only thing that ruined it for me was the sound going out of sync on the Blu-ray copy I watched, and that had nothing to do with the film itself.

It is hard to pin down what it is that makes this film so wonderful, which means that it is a combination of all the elements of filmmaking that elevate this piece. The score is exceptional. It is not just one piece of music that stands out, but all of it, from the piercing harmonica theme that accompanies Charles Bronson's unnamed man, to the haunting, melancholic tone of the track that relates to Jill McBean. The cinematography is incredibly memorable, with its widescreen shots that cut to extreme close-ups on our character's eyes. The performances are all note-perfect, and the casting of Henry Fonda as the villain is a stroke of genius. It completely unsettles you as you discover that the lovely character from The Grapes of Wrath, The Lady Eve and 12 Angry Men has callously killed a whole family.

The story takes the well-known tropes of Westerns - the coming of the railway (and consequently civilisation), and the man with the unknown past (and name) - and turns it into myth; hence the film's evocative title. The film deserves its place on all those essential films lists, and has gone some way to curing my apathy to the genre. Watch this one the biggest screen you can to fully appreciate those dramatic edits of landscapes to faces, with the best sound system, so that the score is etched on your mind.
Posted by Julia Mac at 19:47