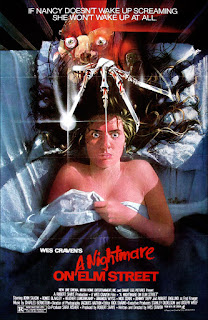 I didn't think slasher horror films would appeal to me, despite my enjoyment of body horror. If they are all as entertaining and wryly comic as Craven's film, then I may find myself eating my words. While Craven takes the tropes of the virginal heroine, and morality tale undertones as to who dies and who survives, he adds a truly terrifying idea around a vengeful child-killer haunting teenagers in their dreams.

The gory effects are still shocking and over the top, as well as the use of rotating sets to achieve the effect of possessed bodies flying around the room. The performance of Robert Englund as Freddie Kruger is incredibly memorable, his gleeful as iconic as the claws on his glove. The ending is slightly confusing, but does work as we spend much of the film wondering if what we are seeing is reality or a dream (it is not always easy to tell).

I was not 'scared' by the film, though if had seen it as a young teenager, I would have been shocked by it. However there is much to enjoy even for the more jaded film viewer, including the presence of an extremely youthful Johnny Depp.
Posted by Julia Mac at 05:24