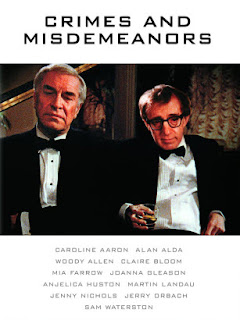 Few people can mix existential philosophy and comedy together, and no one does it quite like Allen. In Crimes and Misdemeanors we follow two different men, each grappling with infidelity. Martin Landau's Judah Rosenthal has a mistress who is threatening to reveal her existence to Judah's wife, causing him to decide to get rid of her in the most thorough way possible. Allen plays Clifford Stern, a documentary filmmaker who can't quite commit to adultery with Mia Farrow's Halley. The cast, who are all brilliant, is dotted with many familiar faces, including Anjelica Huston as Judah's desperate mistress and a scene-stealing Alan Alda as Clifford's brother-in-law and rival (in all things).

This is top-tier Allen, up there with Annie Hall, Hannah and Her Sisters and Manhattan. The central question - how much guilt can one man cope with? - is cleverly explored, with no easy answers given. A touch of Bergman is provided by Bergman's frequent cinematographer Sven Nykvist, whose camera calmly, almost coldly watches the action. The title is also a reference to the director, echoing Cries and Whispers.

Though not as laugh-out-loud funny as other Allen films, Crimes and Misdemeanors stays with you long after its finished. It is incredibly well-written, genuinely clever, and the jokes, when they come, are brilliantly sharp. As with all Allen's films, don't come expecting a 'happy' ending.
Posted by Julia Mac at 22:45