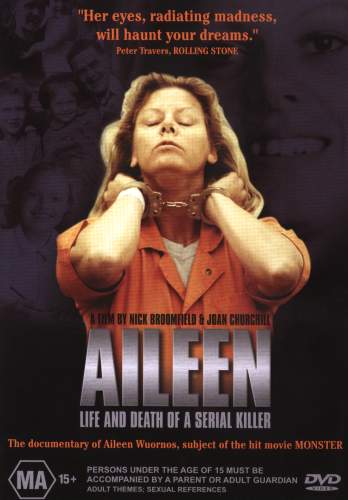 The only thing I knew about Aileen Wuornos going into Broomfield's films was that she is considered the first female serial killer in America, and, coupled with being lesbian, meant she was ideal for the media to write salacious tabloid stories about her activities. Most documentaries about crime tend to pick over the offences, asking questions about the truth of the evidence. Broomfield's films take a different approach. There is never any question that Wuornos murdered seven men; instead Broomfield looks at the media and law circuses surrounding her trial, and argues that she was wrongly given the death penalty.

I had originally watched Selling first as it is part of the 1001 Movies List, and only realised there was a second one after looking it up. The two should really be watched together, as Life and Death complicates the already complicated events of Selling. Selling follows Broomfield's attempts to meet with Wuornos face to face, coming up against Wuornos' lawyer Steve Glazer, and her adopted mother Arlene Pralle. It also briefly explores the accusations made against the police investigating the case, that they were speaking with Hollywood about selling the story to the highest bidder. Life and Death is Broomfield returning to meet with Wuornos a few weeks before her execution, and we see several interviews with her that suggest she is not mentally stable.

Both films are quite personal, with Broomfield a significant person in the story; Life and Death begins with him giving evidence at a hearing about Wuornos' case. Though the craziness of the American gaol system is touched on, Broomfield focuses largely on Aileen as a person, allowing the audience to hear in her own words, and learn about her background and the frankly awful life she led.

These two films are a fascinating depiction of a very complicated and messy situation. Broomfield gets us to sympathise with Aileen one moment, then remind us of the terrible crimes she committed. I have yet to see Charlize Theron's Oscar-winning portrayal of Wuornos, but she would have had to work hard to embody all the contradictions of this human being.
Posted by Julia Mac at 05:30