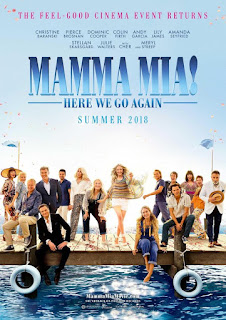 In Muriel's Wedding, Muriel loves ABBA's music and wishes her life was as good as an ABBA song. The first Mamma Mia! film was light and frothy, and a lot of fun, and felt like it encapsulated the spirit of songs like 'Waterloo' or 'Gimme Gimme Gimme (A Man After Midnight).' But as any good ABBA fan will tell you, so many of their songs have melancholic ideas or themes (they wrote great break-up songs). Mamma Mia! Here We Go Again is much more melancholic and wistful than its predecessor, as it focuses on loss and heartbreak, as well as the deep bond between parents and children.

I was raised on the music of ABBA, with my parents playing it during long car journeys. As a result, I love their music, and saw the original Mamma Mia! three times when it came out in 2008. I watched it recently now having developed a more critical brain, and while its flaws are definitely there, it is still highly enjoyable. Here We Go Again improves on the first; it probes more of the emotions, fleshing out the backstory of Sophie's three possible fathers as we follow Donna trying to find where she is supposed to be, and with whom. We also follow Sophie coming to terms with Donna's death, trying to honour her mother and feel close to her.

If you hate ABBA's music, these films are certainly not for you; and I know a few ABBA fans hate the "butchering" of their songs. I however thoroughly enjoy these films. While Cher's inclusion feels  bit forced, the rest of it works really well. The songs felt better integrated into the story, and the female cast are darn good singers; the men are fun to watch, and looked to be having the time of their lives.

The ending is beautiful and heartfelt, and there were many sniffles from the mainly female audience in the cinema. The film demonstrates the joy and sadness of ABBA's music catalogue, music that has been the soundtrack to many people's lives, including mine. It may be silly, but it only offers love, and ultimately it is the love between parents and children that provides the backbone to the film. And that is a lovely message to be left with.
Posted by Julia Mac at 19:49