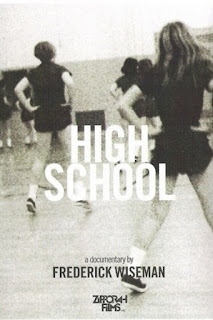 The late 60s must have been a weird time to be a teenager. The cultural gap between yourselves and your parents/ teachers (at least the older ones) would have been stark, as you grappled with ideas around race and sex. This gap is the focus of Wiseman's film, as he documents a day in the life of a typical high school, his camera capturing the "pearls of wisdom" cast down before the students by their elders.

High School is shot in black-and-white, and most of the shots are close-ups of the teachers talking to their students. While many of the encounters will be familiar to anyone who went to high school, it is the casual remarks of some of the teachers that truly shock: the sewing teacher commenting on a girls "weight problem;" a head teacher telling a boy to just take the unfair detention and then complain about is afterwards; a teacher reading a letter from a former student who is fighting in Vietnam in which he says he considers himself a mere "body" (ie disposable canon fodder), and then thanks the school for making him what he is. The sole focus of the teachers is to engender respect and compliance in the students, with little attempt made to develop them as people.

The situation is not entirely grim, and there are moments of comedy. The visiting gynecologist dishes out some good advice, and has a brilliant response to the question "Can you make a girl pregnant by just rubbing the vagina?" (I will admit he slightly lost me when he joked to the boys-only audience about being paid to put his finger inside vaginas all day, and calling the hymen a "cherry" because of what happens when you pop it). There is also a nice scene of the English teacher playing a Simon and Garfunkel record, demonstrating its poetry. It is fitting that the song is about people existing beside each other but not connecting, as that is the central idea of the film.

If one wanted to make excuses for the older teachers and parents, I would point out that most would have grown up during the depression, when survival was the most important thing, and life seemed precarious. They also watched the rise of ideas wreck havoc on Europe, and probably fear the same thing happening in America. But of course the fears of the students, around sex, race and death (Vietnam is still going) are quite different, and their hunger for more than just existing clashes with the values of the teachers.

Wiseman has made a lot of documentaries, and is still working today. After watching High School I would certainly seek out his other films; his first Titticut Follies looks particularly good.
Posted by Julia Mac at 06:12