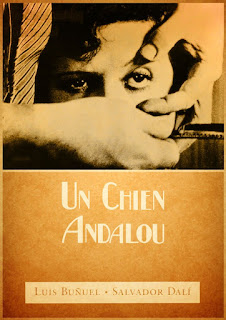 Few pieces of art are still shocking 90 years after they were made. They lose their shock value because of changes in society's tolerance for violence or sex; or they are so famous that they become too familiar. While Un Chien Andalou is famous, and has influenced a great many filmmakers and artists, it still provokes a visceral reaction today. But while it is powerful, it is not a fun experience.

At film school you are told that if your film is going to be extremely violent, horrifying or just go plain crazy by the end, you need to put a little taste of it in the first act: you are prepping the audience for what is to come. Un Chien Andalou certainly adheres to this rule. The film's most famous scene, the eye being sliced, happens in the first minute, revolting the audience from the start. From there things become just plain weird, with ants crawling out of a wounded hand, and a man pulling along some dead donkeys and priests on pianos by rope (why? Who knows).

What does it all mean? According to Bunuel it is a cry for death, and the violence of many of the images implies a bloody ending is being asked for. While I like free association editing - it can be very witty - Un Chien Andalou is a hard film to like, or even admire. It is one of the purest examples of a film that doesn't care what the audience thinks, and doesn't even try to engage it for the ride - you have no story to hold onto to.

Much like Salo, I can now say I've seen the film, and have no intention for seeing it again.
Posted by Julia Mac at 04:38