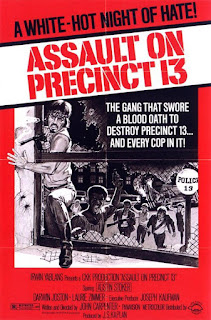 I decided not to read the synopsis for Assault before watching it. I knew it was directed by Carpenter, whose films I have enjoyed, and that it was a thriller, so hoped I was in good hands. The result was a neat, clever story which deftly displays Carpenter's ability to sustain suspense, and outline plot with little need for exposition.

Three different story strands are set-up at the start. A local violent gang in Los Angeles is going around killing people; a bus with prisoners on board leaves to transport them to a new gaol; and a black cop is assigned to a station that is in the process of closing down (leaving it with little resources, like weapons or man power). The prisoners end up at the under-manned station when one becomes ill, and the gang members also turn up when a man, whose daughter they killed, runs to the station for protect.

There is no fat on this film, from its tight script to its cinematography and acting. While not doing anything new with the genre, it is a great example of a thriller. The story is really well paced, gently easing you into the different story strands. The characters, while not given great depth, are given enough backstory to engage the audience, and are well played by the cast.

While the film is not a horror film, and was made before Carpenter made Halloween and The Thing, you can already see Carpenter's talent for the genre. The famous scene of the young girl's death near the ice-cream truck could only be done by a director comfortable with horrifying their audience. The influence of Romero's Night of the Living Dead also adds this horror element, the gang members as unrelenting and seeming unstoppable as zombies.

The only mistake of the film may be the title, as the action does not take place at Precinct 13 but at Precinct 9, Division 13. But hey, you watch the film for the "Assault," not the precinct number.
Posted by Julia Mac at 05:37