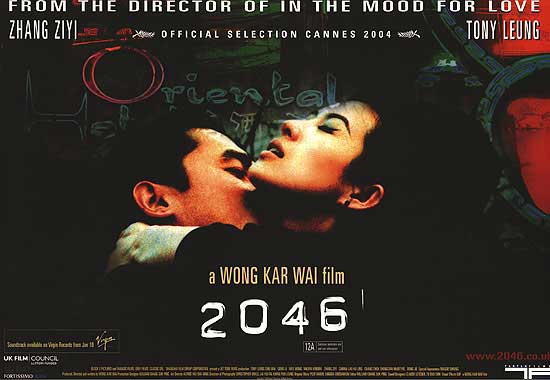 I love the aesthetics of the worlds Wong Kar-wai creates, filmed with an eye for colour and light that aids the romance of the characters. In the Mood for Love rivals Brief Encounter in its depiction of restrained, yearning unrequited love, and 2046 acts as a sequel to that story. We follow Chow Mo-wan after the dissipation of his affair with Su Li-zhen. He has left his wife, moved into a new apartment, and embarks on a series of affair with other women while also writing a science-fiction story set in the year 2046.

After the painful beauty and restraint of In the Mood for Love, 2046 is a bit of shock. It is louder and more explicit, with a timeline that jumps around in time and between Chow's fictional story and his real life. The brooding melancholy that is presence in so many of Kar-wai's films is present, but Chow's character feels less sympathetic than in the previous film. Everything still looks beautiful and I would watch Tony Leung Chiu-Wai in anything, but it suffers from comparison with In the Mood.

Worth a watch, but be prepared to have your ideas about the ending of In the Mood for Love completely dashed.
Posted by Julia Mac at 06:01