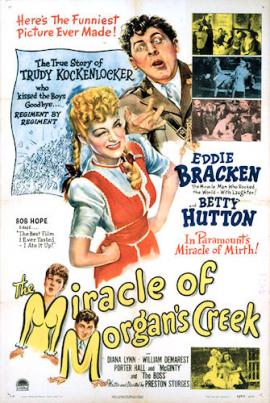 I count Sturges amongst my favourite directors. At the height of the enforcement of the Hays Code in Hollywood, Sturges worked hard to push against the boundaries set around depictions of sex, coming up with increasingly creative and hilarious solutions. The set-up for Morgan's Creek sent conniptions through the censors at the time, with its tale of a young woman left pregnant after getting married to a departing soldier while under the influence of alcohol. When Norval, her friend with a deep passion for Trudy offers to help, a race against time, parents and the law ensues.

While Trudy does drink and is pregnant, she and her beloved Norval are two of the most innocence characters in a Sturges' film. Trudy has none of Jean Harrington's sparkiness, nor does Norval have Tom's conniving from The Palm Beach Story. Instead, the two spend much of their time together shaking with nerves, often with very funny consequences: porches being broken, and a fake marriage falling apart.

While not as brilliant or sexy as The Lady Eve, this is very funny. Like many a Sturges film, I feel I will need to watch this again, having now grasped the strange turnings of the plot; and I know I missed some jokes. As pointed out in a recent (and excellent) article in the Guardian Sturges doesn't give his audience definite endings. Instead he leaves us hanging, wondering what will happen next. Morgan's Creek is no different, though the end card hints at yet more latent heroism in Norval.
Posted by Julia Mac at 05:58