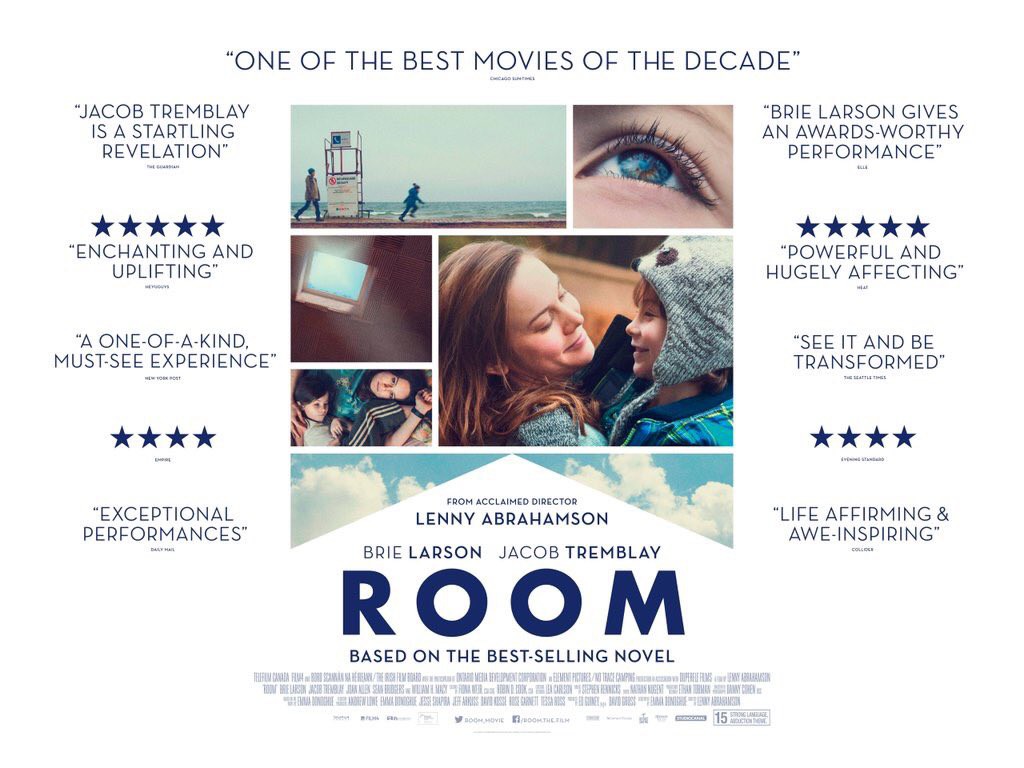 I have never seen a movie that has made me cry as much as Room. I have never been particularly lacrimose when it comes to films, though in recent years I have noticed I am becoming more moved by the films I see. Most of the films that have prompted tears have done so through particular moments: the 'Daddy, my Daddy' scene from The Railway Children comes to mind. That scene often leaves me on the verge of breakdown, as does the end of Toy Story 3 and Woody's loving 'So long, partner' to Andy as he leaves. However, my reaction to Room was very different from these.

I started crying about a quarter of the way through, and didn't really stop until the end. There were moments where I was not actively weeping, and the tears on cheeks had dried, but my eyes were moist throughout. The interesting thing is the film is not sensationalist in its depiction of the situation, something I could easily have been. There are also no violent or disturbing scenes, as the story is told from Jack's perspective, and his Ma (Brie Larson) protects him, and us, from all that. What made me cry was the emotional truth of the storytelling and the exquiste performances of Larson and Tremblay.

I cannot imagine any other performance being more moving than Larson's, and have no quibble if the Oscar goes to her (though I don't think they are an accurate measure of quality). We don't need to see all the suffering of body and mind she has gone through; we can see it on her face. The love she has for her son is also obvious. Tremblay doesn't play Jack as a angelic child, but neither is his performance forced. I believed the relationship between the two, including the arguments they have.

The film it most reminded me of was To Kill a Mockingbird. We have a child who is caught up in a very complex adult situation, yet manages to support their parent in ways they don't understand. Jack does not know that his very existence kept his Ma alive, and also becomes the way she escapes.

The cinematography at first seems to be only to serve the performances, but Abrahamson and Danny Cohen cleverly use to the camera to make the space of the room feel large: which is how Jack sees it. This is his whole world, and has everything (he thinks) he needs.

I cannot recommend this highly enough. Seeing at the cinema added to the overwhelming experience, as you see each flitter of emotion cross Larson's face. Almost perfect, and utterly heartrending.
Posted by Julia Mac at 14:34