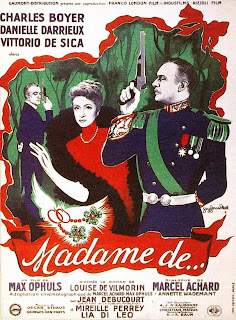 My first reaction after watching Ophuls film was, why is this considered so great? It appears frequently on must-see lists, and is clearly a French classic. While I do like a good historical romance, and this is a good historical romance, what made it stand out against the many others? The story is not particularly groundbreaking: a rather wealthy, frivolous wife whose life is shattered when she falls in love with a another man (in this case the famed Italian director Vittorio de Sica, who made The Bicycle Thieves, which feels like the opposite to this type of movie).

What does elevate Madame de ... are the details of the story and of the world the characters inhabit. The whole story turns of the movement of Louise de...'s earrings, a wedding gift from her husband. She sells them to help alleviate her debts, only for them to come back to her with a whole different meaning attached to them. They go from being purely mercenary (a bit like her marriage) to a token of love from her new lover. As the movie goes on more layers are attached to these earrings, shaped like hearts.

The most impressive scene of the film for me was the portrayal of the development of Louise and Donati's affair. A montage of balls blend into each other, as the two have almost the same conversation, but with a bit more intimacy each time. Donati at first asks about Louise's husband; at a later ball Louise pretends he has asked, making up for Donati lack of formality in their relationship. By the end of the sequence the two are the last ones of the dance floor, an occurrence not unnoticed by the musicians.

While I wasn't as blow away as some critics have been by this film, the skilled storytelling of Ophuls is great to watch. The characters and the sphere they move in (high society) threatens to make the audience cry 'who cares?' but the beauty of the filmmaking largely keeps that at bay.
Posted by Julia Mac at 21:05