One must always be aware of the historical and cultural context of a film. Otherwise you may find yourself judging it with modern tastes and ideas, and seeing it as utterly alien to you. This is a risk particularly with early films, especially melodrama. Though Broken Blossoms has moments that rankle (the alternative title 'The Yellow Man and the Girl' was the first instance for me), this film manages to surprise in its sympathetic portrayal of an interracial romance.

Though Cheng Huan is played by American actor Richard Barthelmess, he makes Huan the film's moral centre. He has come to London to spread the news of Buddhism, but has risked becoming corrupted by the uncaring city. He is brought back to his beliefs through he tender care of Lucy, who has escaped her abusive father. Griffith's direction shows an appreciation of Huan's religion, with several scenes of Huan praying before his statues, and speaking about Buddha's teachings.

Lillian Gish is one of the best actors of the silent era: the camera loves her face, and she can say so much with a subtle lip twitch or look. Some of the most affecting moments in the film are her character trying to force a smile: 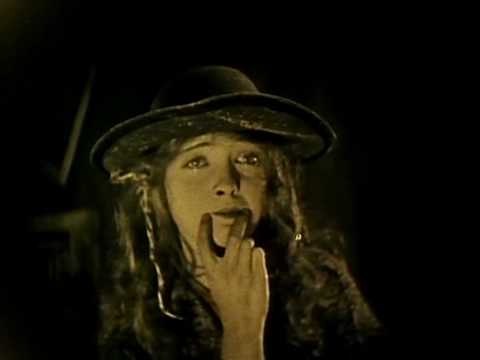 You can see the pain in her eyes, and how close she feels to giving up.

The boxing scenes in the film hark back to the earliest films, shown in Kintoscopes and Nickelodeons in the late 19th/ early 20th centuries. Such spectacle and action was see to work well on this new technology, and the continuing popularity of action films (and boxing as a subject itself) proves this to be true.

Broken Blossoms would be a difficult film for anyone who is not interested in film history to watch; and even if you are, you may find it hard to enjoy. However, it is one of the few surviving feature films of the period, and shows yet again how significant Griffith was in developing the language of film. Though I much prefer his next film Way Down East (1920), this is of interest for its handling of race.
Posted by Julia Mac at 23:05