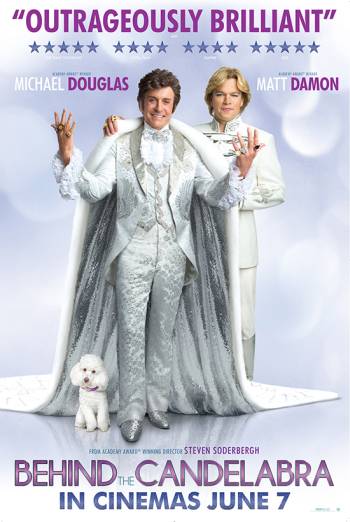 This was a TV movie in America, but was released in cinemas in other parts of the world; for me, it counts as a cinematic movie. It was rather funny to watch this only a week after seeing Blue is the Warmest Colour; both are about same-sex relationships that end in tears, with one party unable to emotionally move on. However, the similarities end there; Blue focused on human faces (and bodies) and approached its subject matter with seriousness. Soderbergh revels in the famous opulence of Liberace, and many parts of the film are very funny.

Damon and Douglas have great chemistry together. Douglas' performance almost takes over the film, which works perfectly for the personality of Liberace. Damon is also very good, and we experience this strange new world along with him.

The production design, costume and make-up are the other big stars of the film. We see a lot of Liberace's house and every room is decorated with bling and fur and mirrors. The make-up both ages and reverses the ageing of the characters, sometimes in astonishing fashion: Douglas' Liberace looks almost unrecognisable after his plastic surgery. And of course, the costumes are fabulous.

The film's title, also the title of Thorson's memoir, points out how funny it is to look at Liberace with 21st century eyes. To us, it is so obvious that he was gay, with all the camp and kitsch he employed in his act; candelabra's are not well-known for their concealing qualities. But as is pointed out in the film, many of Liberace's audience chose not to see what was so obvious; and Liberace himself worked hard to preserve his privacy.

As someone who was born after Liberace's heyday, this was a fascinating insight into one of the most iconic entertainers of the 20th century.
Posted by Julia Mac at 01:21