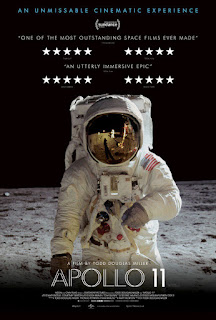 Having been born over twenty years after the Moon landing took place, the event always had a sense of "of course we did" about it. As a child I had no idea about the level of scientific achievement needed to make it happen, nor the political and historical context surrounding it. As an adult, having learned these things, I was amazed that such a thing was actually accomplished, knowing how little computer power was available in the 60s, but that didn't still give the full picture. Miller's documentary, made using only contemporaneous footage and voice-recordings, immerses you in the whole event, filling you with awe and amazement about the scale of the endeavour.

The opening shots are of the wheels of large machines slowly rolling along tarmac, the vehicle groaning and clunking, dwarfing the people walking beside it. The next shot reveals what is being carried: only Saturn V, the rocket that propelled Apollo 11 into space! From there we meet the three astronauts who manned Apollo 11, and the Mission Control Centre in Houston. The film follows the complete journey of the mission, from launch to the return of the astronauts to Earth.

Apollo 11 is not a documentary designed to walk you through each step of the mission, and it offers very little by way of explanation for the science behind it. The most it does is provide simple animated sequences that demonstrate the maneuvers performed by the craft: one example is the lunar module reconnecting with the command module. Instead the footage - of Saturn V launching into space, of the lunar module gliding over the surface of the Moon - is allowed to play out for long periods, drawing you into the moment, making everything feel immediate and full of tension. The result is that by the film's end an historical event you knew the outcome of becomes vivid and emotional. You are connected to the hope and optimism of the spectators shown in the film, the people who turned up 50 years ago to witness history. You are as invested in the outcome as the scientists and engineers watching and listening with bated breath in Houston, despite the knowledge all will be well.

I can imagine this becoming the definitive documentary about the first Moon landing, in part because of the previously unseen footage included in it. It deserves to be seen on the biggest screen possible, with the best sound system available. It captures the profound achievement of this moment in history, and draws viewers into the emotions felt by many at the time.
Posted by Julia Mac at 00:55