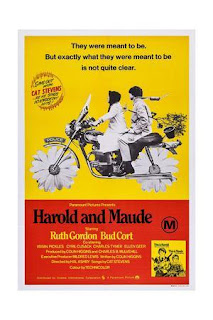 I had watched Harold and Maude a number of years ago, before I started recording my thoughts about films. I remember enjoying it on first viewing, though I was also slightly thrown by the odd turns the plot takes. Films that have strange plots and and tones often prove richer on second viewing, and as the film was available for free on SBS Movies on Demand (I cannot praise this local service highly enough), a re-watch was in order.

One could argue Harold and Maude is a twist on the plot of The Graduate. Both films feature a listless young man with parents and adults around him who don't understand what he wants - though if you were to ask him, he wouldn't be able to articulate it either. He then meets an older woman who provides something new and different in his life, eventually forcing him to make a decision about his future. Of course, the big difference is the nature of the older woman: in The Graduate Mrs Robinson is the same age as Benjamin's parents, and they never manage to open up to one another. In Harold and Maude the gap is at least two generations, and Maude's considerable life-experience, and brushes with real tragedy, draw the youthful Harold out of his death-obsessed shell.

The film is very 70s, with its fashion and political climate - not the mention the lovely Cat Stevens' soundtrack. For viewers today this adds to the film's charm. The rarefied, upper-class lifestyle of Harold's mother is beautifully contrasted to Maude's life in her converted train carriage house. The first feels like a museum, the other a comfortable, ramshackled place demonstrating a life well lived.

Recently I've been pondering what makes a film a "cult" classic. It is one of those things that is hard to define: broadly it has to do with the film's subject matter being somehow contrary to the mainstream, or that the execution of its ideas is unconventional. Or it can be about an audience's reaction to the film. Whatever makes a film "cult", Harold and Maude has it in spades.
Posted by Julia Mac at 04:09