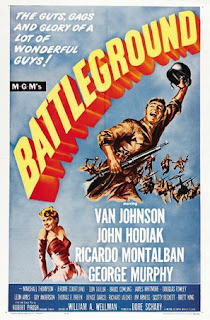 It is the end of 1944, and a group of American soldiers are sent to Bastogne to hunker down in the town's outskirts during what became known as the 'Siege of Bastogne,' part of the larger Battle of the Bulge in World War II. We follow Private Jim Layton as he joins the squad and works to make a place for himself in this tight-knit group, as they battle the onslaught from the German forces, the dwindling supplies, and the harsh winter.

Paul Vogel's black-and-white cinematography really immerses you in the bleak environment of war-torn Bastogne. Most the scenes are set outside in the snow and fog, shrouding the characters in white as they camp in their snow-covered trenches, emphasising the bitterness of the weather. The acting from the ensemble cast is really good; with such a large number of characters it could be easy to lose track of who's who, but with actors like Van Johnson, Ricardo Montalban and James Whitmore this doesn't happen after initially meeting them.

While this is not as famous as many other WWII films, it is certainly worth watching. You really feel bedded in with the troops, spending time with them as they wait nervous and bored for something to happen, or facing death as they return sudden enemy fire. The deaths are done poignantly, without much display of emotion, and yet they do sink in. This film may be quiet and at times look subdued, but it is infused with a nervous tension throughout that draws you in.
Posted by Julia Mac at 05:32