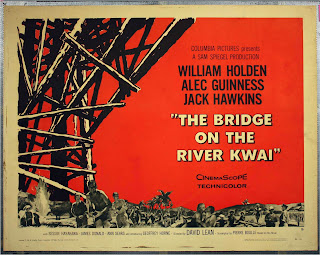 A group of British POWs arrive at a Japanese-run camp during WWII, led by the stoic Lieutenant Colonel Nicholson, who develops a complex relationship with the Japanese commandant Colonel Saito. While the British are put to work building the titular bridge, an American prisoner escapes, only to return to the camp as part of a mission to blow-up the infrastructure.

There are some films that are so well-made, with all its elements so perfectly balanced together, that it is hard to say anything about them, other than "Watch it. Now!" This is how I feel about David Lean's film. You could speak/write volumes about the greatness of the film, but none would properly capture its true brilliance, which lies in the perfectly pitched performances, the dynamics between the characters, the meticulous script which never drags, and the colour cinematography that portrays this harsh world.

While many have complained that the film is anti-British and anti-Japanese in its stance (including members of the cast and crew), I feel it is overall anti-war (as so many films in this era were). There is a bitterness to the ending that leaves you with the feeling 'what a waste of human life.' The most interesting character is Alec Guinness' Nicholson, who is the perfect-to-a-fault soldier. His stoicism and devotion to convention and order is played as a form of madness, and yet I couldn't help but admire him and his desire to find meaning amongst the madness, giving his men a purpose while imprisoned. His loss of perspective is difficult to watch, knowing what is going to happen to the bridge.


The Bridge on the River Kwai is up there with Casablanca as one of the best films that won Best Picture at the Oscars. It is one of the few films that completely justifies its considerable running time, and its ending is emotionally devastating. Films don't come much better than this.
Posted by Julia Mac at 05:55