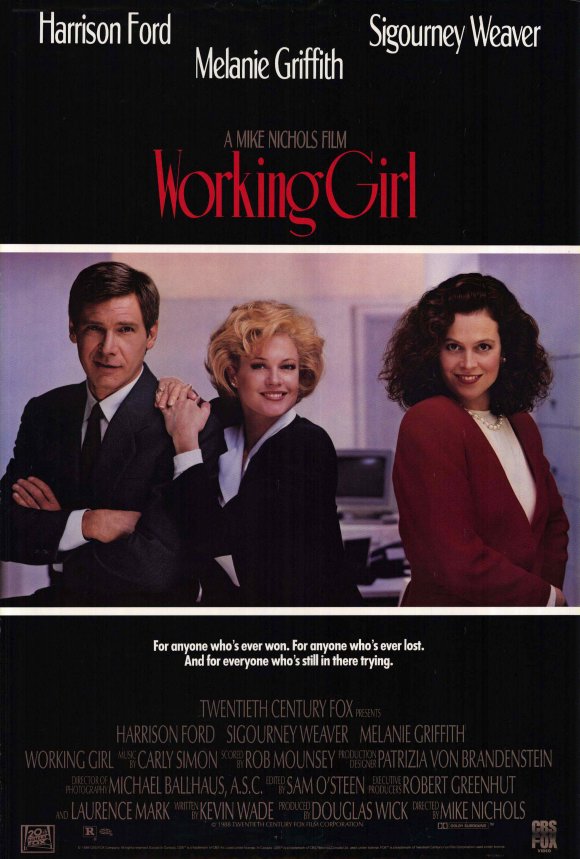 I am surprised that this film garnered so much notice from the Oscars. That is not to say that this is a bad film, but I cannot think of a romantic comedy/ drama about women in the workforce being nominated for Best Picture these days, and even Best Actress and Best Supporting Actress categories tend towards the dramatic.

While Working Girl is now somewhat dated, the performances still hold up. Melanie Griffiths is quite lovely as Tess McGill, as she balances her character's class, gender and intelligence. It is not showy, but all the more striking because of it. Sigourney Weaver is wonderfully confident and snobbish as Katherine Parker, a woman who breezes through life assuming everything will go her way. The scenes between these two are filled with comedic tension. Joan Cusack plays Tess' friend Cynthia with relish and a lot of humour, but their friendship is also portrayed beautifully. Harrison Ford is almost in the eye candy role, but also gets his own moments of comedy, and has arguable never been more attractive.

The story falls into a few cliches, but the dialogue is good, and the women have conversations that would make Bechdel weep with joy. Nichols uses New York well, as the office spaces contrast to Tess' home in a more working-class area, to Katherine and Jack's up-market apartments.

While I am still amazed at the Oscars love this received, I thoroughly enjoyed it. It is a film whose many interesting ideas appear after you have seen it. Much of what I have written here only occurred to me as thought about it weeks after seeing it. Watch in a double bill with 9 to 5 for several hours of women smashing it in the workforce.
Posted by Julia Mac at 18:24