I have decided that for the beginning of this year I will do a blog series on Australian films. There is no greater reason for this, except that I myself am Australian, and think that our film industry has, and continues to produce some great films. Though a few break through to receive international acclaim, many remain in obscurity. This series, which I am calling 'Great Southern Land Films,' will be a mixture of the famous and the hidden gem.

I have a theory, a very unscientific one, that almost all Australian films can be slotted into two categories: life in the suburbs, and life in the outback (or bush). Films that explore suburban or even city life may engage with themes of alienation, isolation, conformity with either a dark or humourous approach. Films set in the outback often deal with our relationship to the land. There are two subsections to this category: Aboriginal people's complex spiritual connection with the land, and Europeans' problematic engagement with it.

Muriel's Wedding falls into the suburban Aussie film category, while Priscilla, Queen of the Desert is a mixture of the two, as it deals with a trio of suburban Sydney-siders, two drag-queens and one transsexual, driving into the red centre of Australia. Both films tackle the idea of alienation: Muriel attempts to escape her feelings of alienation associated with Porpoise Spit by going to Sydney to live with her friend Rhonda; Tick, Adam/Felicia and Bernadette enter a land that is like another planet to them, and to the locals they appear to be aliens (at least at first).

Muriel feels different from the other girls in her 'friendship' group. Pretty, thin, and commonly blonde, they constantly belittle the more dowdy Muriel. The scene where they drop her from the group is a wonderfully grotesque, as Muriel bawls in front of them. (Coincidentally, this is one of the best actual crying scenes in a film. Most women in films 'movie-cry,' which means no blotchy face, no open wail, and no runny nose.) Muriel's own family ostracise her; 'You're terrible, Muriel' is a common phrase in the Heslop household.


"It's funny. We all sit around mindlessly slagging off that vile stink-hole of a city. But in its own strange way, it takes care of us. I don't know if that ugly wall of suburbia's been put there to stop them getting in, or us getting out."

Interestingly, an Aboriginal group enjoy their performance, but the white locals are far less kind. Adam, dressed as Felicia, goes looking for sex with a group of young men who are less than impressed to find the fit and willing woman is actually a bloke. The culture of rigid gender stereotypes finds its zenith with the ping-pong ball scene in the bar. Cynthia Campos' trick may require more skill than the ability to dress up in flamboyant costumes, but it is far less tasteful and clever. (The character of Cynthia Campos is one of the films' only drawbacks. It borderlines on being racist and sexist). Female sexuality is objectified in her performance, while the gender-bending drag queens are trying to provoke and undermine assumptions based on such stereotypes. The local men know which they are more comfortable with.

Conformity is explored through the institution of marriage in both films. Tick reveals that he is married to the woman who runs the Lasseter Hotel Casino, a circumstance at odds with his current lifestyle, and his sexuality. He also has a son, whom he hasn't seen in years. Adam and Bernadette find his conventional background rather hard to process; is he straight, or gay? Tick's answer is 'I don't know.' Tick wonders what his son is going to think, and whether he will accept his unorthodox lifestyle. The ending to this storyline is very heartwarming.

Muriel spends much of the film wanting to be a bride, believing that marriage will solve all her problems and make her happy. Her glitzy wedding is all she ever wanted it to be, but she has ruined her friendship with Rhonda. Even though Muriel's husband begins to value her as a person, she chooses to rescue Rhonda from suburban drudgery. The last scene of the film is of them saying goodbye to familiar Porpoise Spit places, driving off into an unknown future. Muriel has broken with the traditional idea of feminine happiness, choosing friendship over marriage.

It is interesting to note that most of the posters (such as the one above) for Muriel's Wedding (and DVD covers too) featured a shot of a beaming Muriel decked out in a wedding dress, being showered by confetti. I wonder how many people were surprised by the film's feminist ending.

Both Muriel and Priscilla are films that present people throwing off the shackles that bind them to conformity and embracing the path less chosen. Perhaps this quality of self-expression in its characters find no greater example than in both films use of ABBA. Reader, you may not know this, but Australia has the biggest fan base for ABBA outside of Sweden. We love their music, and are the home of the parody cover band Bjorn Again. ABBA is mentioned throughout both films: they are Muriel's favourite band, and feature heavily on the soundtrack. Muriel at one point says:


"When I lived in Porpoise Spit, I used to sit in my room for hours and listen to ABBA songs. But since I've met you and moved to Sydney, I haven't listened to one Abba song. That's because my life is as good as an Abba song. It's as good as Dancing Queen."

In Priscilla, Bernadette is constantly decrying Tick and Felicia's love of the group.

ABBA songs are a show piece in each film: Muriel and Rhonda perform Waterloo at a Talent Night while on holiday, while Tick/ Mitzi and Adam/Felicia do their best Anni-Frid and Agnetha impressions for Mamma Mia. 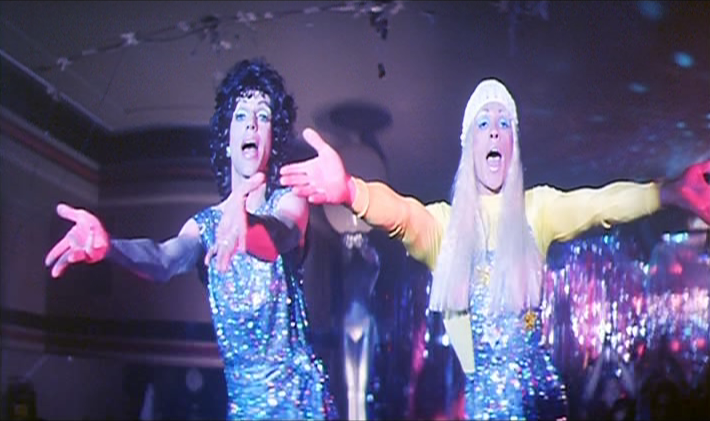 Inside every Australian, be they male, female or both, is a desire to mime along, in costume, to ABBA.

Factoid: the idea for Priscilla came when Stephen Elliot heard someone refer to a drag queen as a 'cock in a frock.' His mind moved in mysterious ways, and came up with the phrase/idea of 'a cock in a frock on a rock.'

Another is that the late national treasure, Bill Hunter, is in both films: his is Muriel's slimy politician father; and the open-minded, tender Bob. 1994 was obviously a busy year for him!