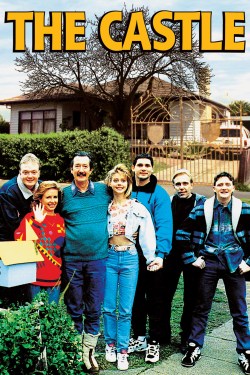 As you can tell from that write-up, the film falls squarely into the suburban category of Australian films. However, the suburbs are not presented as a soul-crushing place to live, but is celebrated for its sense of community. Darryl is not only fighting for his home, but also his neighbours, two of whom are Lebanese immigrants. There is gentle satire about the obliviousness of the Kerrigans, who don't realise their lack of taste or culture. But it is not a negative thing; the Kerrigans are a happy family who care and love each other without judgement. Even Wayne Kerrigan, in gaol for armed robbery, is still part of the family.


It is Australia land in the land of Oz (it is 26 January here), and what better way to celebrate than with a cracking local classic: The Castle (1997). Directed by Rob Sitch, written by Sitch, Santo Cilauro, Tom Gleisner and Jane Kennedy, this presents an hilarious take on the old David-and-Goliath story. It is an early role of Eric Bana, and also stars Michael Caton, Anne Tenney, Tiriel Mora, Stephen Curry, Sophie Lee ('beautiful' Tania from Muriel' Wedding) and the late, great Charles 'Bud' Tingwell.

A suburban Melbourne family, the Kerrigans, live in gentle contentment near the airport. They are upper-working-class who think they live in the greatest place in the world. One day, a property valuer comes to inspect, and the whole street is later presented with a compulsory acquisition order; the airport is planning an expansion project. Darryl Kerrigan, head of the family, decides to fight it, on the principle that 'a man's home's his castle' and he should be allowed to defend it. He gets all the way to the High Court of Australia with a little help from small time lawyer Dennis Denuto and QC Lawrence Hammill.

When Darryl meets Lawrence, he doesn't see any disparity in their lives, though he concedes Lawrence is more intelligent. Lawrence also recognises this quality of the Kerrigan family, and believes it to be worth defending. Australians like to think of themselves as egalitarian, and this film celebrates that idea.

This is the Casablanca of Australian films; many of its quotes are now part of the Australian vernacular. 'How's the serenity!' is an exclamation of contentment, usually used when holidaying in Bonnydoon. 'Tell'm he's dreaming!' is used with scoffing derision upon hearing someone's ridiculous offer on your boat or any object you are selling. 'That's going straight to the pool room' denotes a cherished object, like a handmade mug. 'It's Mabo, it's the vibe' should be used when positing a feeble argument why something is unfair.*

I cannot honestly say how this film would be received by non-Australian audiences. It is very well-loved here (and I am surprised that it is not showing on free-to-air television today) for its representation of Australian life; how much of it translates would be interesting to see. According to Wikipedia, it was shot over 11 days, and was made for the grand total of $75 000. It made $10.3 million in Australia; clearly, it went straight to the pool room!

*A court case that recognised native title land rights in Australia. For more information: https://en.wikipedia.org/wiki/Mabo_v_Queensland_%28No_2%29
Posted by Julia Mac at 23:16

Email ThisBlogThis!Share to TwitterShare to FacebookShare to Pinterest
Labels: Aussie Films, The Castle