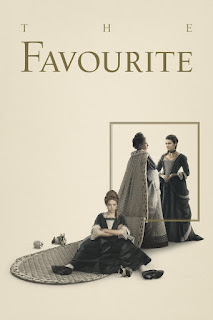 The Favourite follows Abigail Hill, a genteel woman fallen on hard times, who comes to the residence of Queen Anne to seek employment from Lady Marlborough, her cousin. Lady Marlborough (also known as Sarah Churchill), is the Queen right-hand woman, exerting a huge amount of influence over the sickly, often befuddled monarch. Abigail sees an opportunity to rise from her current destitution, and works to replace Sarah in the Queen's affections.

Lanthimos' film is similar to Amadeus in its approach to history. It is not about educating people regarding a particular person or moment, but instead takes a situation - here, the close relationships Queen Anne had with these two women - and spins a darkly funny, beautifully designed tale of ambition, power and friendship. It does not matter whether Olivia Colman's Anne is at all like the historical person, or whether she had sexual relationships with Abigail and Sarah. What does matter is the depth of the performances, and the gorgeous crafting of the world of Queen Anne's court.

The three main performances are wonderful - not unexpected from Olivia Colman, Emma Stone or Rachel Weisz, three of my favourite actors working today. The shifting dynamics between their characters feels like a beautifully choreographed dance, as Stone's Abigail and Weisz's Sarah seek to outwit one another. Olivia Colman is absolutely brilliant as Anne whose life is beset with physical pain (an attack of gout happens early on) and deep emotional trauma (17 dead children, some miscarriages, some dead in infancy; that is going to scar you).

All the elements of this film work really well together, from the witty script which feels true enough to early 18th century England, without being stilted, to the beautifully detailed costumes. The score has period appropriate music as well as avant-garde strings, which adds to the claustrophobic atmosphere.

The Favourite is not a history lesson, nor is it your typical costume drama (though there is nothing wrong with those). What it is is a humorous, at times shocking tale of ambition, desire, and the lust for power that lies behind politics. It is arguably Lanthimos' most accessible film to date, but that does not mean it is any less captivating or complex in its themes than his other films.
Posted by Julia Mac at 03:29