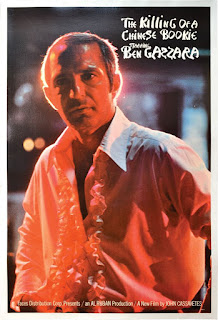 I don't really know what to say about this film because it didn't really make me feel anything. I may not have been in the right mood or mindset to watch it, but it just didn't grab me. I am not a fan of gangster films in general, but I do like interesting takes on genre, and Chinese Bookie is certainly different to other gangster films. But, for whatever reason, I just didn't go with it.

The plot is reasonably recognisable: Cosmo Vitelli, who runs a strip-joint, finds himself in debt to a powerful group of gangster who run a gambling club. To pay off his debt he must kill the titular bookie (actually the boss of the Chinese mafia), leading to Vitelli losing much of what he loves. What makes this different to other gangster films are small details. Vitelli's club is rather artsy, with a focus on themes and creativity, not just nudity. Vitelli's girlfriend is also black, and Vitelli has a close, tender relationship with her mother as well.

The cinematography and acting are low-key, making this a film that asks you to lean into it. Unfortunately I just couldn't get into it. I can see it was well-made, and the acting is good, but it is not my thing. I have appreciated other Cassavetes films but he is not a director I have enthusiastically embraced.

Much like the acts in Vitelli's club, the title promises something perhaps violent and action packed, but instead we get something a bit different. Our expectations are defied, and if you can't change them, you are left wondering what to think.
Posted by Julia Mac at 02:01