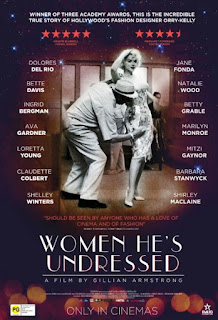 In the opening titles of my favourite film Some Like It Hot is the credit "Miss Monroe's Gowns ORRY-KELLY." I've been watching this film for years, and have occasionally wondered who Orry-Kelly was. Little did I know that Orry-Kelly, born Orry George Kelly, was Australian and grew up in Kiama, a beautiful town (famous for it blow-hole) two hours down the road from where I live. Kelly moved to the US originally to become an actor, but ended up becoming one of Hollywood's top costume designers, winning three Oscars and dressing some of the world's most famous actors.

Armstrong's film is a reasonably straightforward depiction of Orry-Kelly's life. Along with interviews from other costume designers about his significance in film history, we also hear Kelly's own thoughts, from the letters sent to his mother, and his diaries. The film moves onto look at some of Kelly most famous creations, and particularly focuses on his working relationship with Bette Davis. Throughout the film as well is the elusive figure of Archibald Leach, aka Cary Grant, with whom Kelly shared a flat (and apparently more) in the 1920s in New York.

Armstrong's documentary was largely made with an Australian audience in mind, acting as an introduction to this influential person from our shores. While the dramatisation of Kelly's letters and diaries doesn't completely gel stylistically with the interviews and clips of films shown, the film as a whole is a nice slice of film history, and does make one appreciate the art of costume design. Next time I see "Gowns by Orry-Kelly" in a film's credits, I will appreciate exactly what that means.
Posted by Julia Mac at 23:32